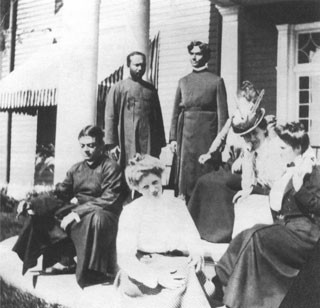 Josephine MacLeod went down to New York on September 17 to meet Nivedita’s ship–so one learns, among other things, from the following letter written by Betty Leggett to Mrs. Bull:

The other sanyasin comes today no doubt as Joe went to fetch her Sunday evening.

We are all in waiting–and the week promises a look at you all–including Dr Helmer. Let naught prevent an early arrival. I hope 01ea is mending rapidly & when she can hold together let her come and be upon the couch in the great hall–or the loggia & listen! How I regret it all–and wish we had sent for her to come when we learned of Swami’s departure from England as we were sorely tempted to do…. We expect Mrs [Florence] Adams the 22nd. Swami needs Dr Helmer badly–he needs to be told the end is not yet. There are many hours when he thinks It is near, as symptoms are graver, in his mind, by heredity.

Swami & Turiananda are in yours–to be more cozy. Swamiji is writing a book on Modern Hindoos–to make some independent means–and to keep busy. He is grand in type as ever.

It was not until the following day, Wednesday, September 20, that Joe and Nivedita arrived from New York. The day after that they wrote jointly to Mrs. Bull, whose ill luck at being detained for so many weeks is, one cannot help but note, our good luck, for we learn considerably more about events and people through the letters written to her from Ridgely Manor than we would otherwise have known. The letter of September 21 read:

Margo & I arrived at 3 P.M. yesterday after a joyous 24hours together.–I am beginning to feel that I am almost as glad to know her as Swamiji.

Today we decked her in our finery–then came down to Swamiji for criticism–which never came. He put the decision entirely into Margot’s care and she said “If I may do as I choose, I shall wear my brahmacharini gerrua always–while on the platform–black otherwise,” & so it is decided–and tomorrow we will go to Kingston to see what can be bought in the way of tough material.

She never was greater, & Betty approves in each detail of her attitude to Swami. Not one thing wld she have Margot change–& her verdict is final in social matters as Margot’s is in spiritual.

Your telegram was a blow–last night–10 days longer away-but “Mother knows best” I have no servants for you yet.

Dr. Helmer will decide what Swamiji is to do and in this his verdict will be final.

Hearts love to my child [Olea] & her mother

[Nivedita added a line:] My sweet Grannie–no idea had I that post time had come. It was the desire of my heart to write to you this morning. Here I am–Plans are growing like flowers. I long to see you & begged Y.Y. to let me come & try to carry off Mrs Vaughan & you! But of course I saw that that was a wrong suggestion–anyway, you will be here directly. Lovingly your Child, Margot.

(It is probable that Nivedita’s “Grannie” as applied to Mrs. Bull had a different origin than Swami Saradananda’s “Granny.” The relationship in Nivedita’s case was no doubt through Swamiji, her spiritual father, who looked upon Mrs. Bull as “mother.”)